On the eastern coast of the Northern Territory on the Gulf of Carpentaria sits the remote township of Borroloola.

Described as one of the most isolated areas of the NT, Borroloola is home to an Indigenous community of around 850 people, one of them being Sydney FC and Young Matildas’ footballer, Shadeene Evans.

Growing up in the bush, Evans was taught about Country and her people from a young age. Her days were spent learning how to hunt goanna, kangaroo and fish by her dad from the time she was five.

When she wasn’t sleeping under the stars and having a yarn around the fire, her favourite past time was to have a ‘kick around’ with family and friends, which is where her love of the beautiful game began.

“I just remember all of us kids running around like crazy, barefoot in the long grass under the hot sun,” the young Marra woman recalled.

“Borroloola is tiny, very isolated community so everyone is really close and connected to the land and the culture.

“Everyone shares their stories and passes them down to younger generations, that’s what I love most about it.”

Little did she know that one day she would be the main character of one of these stories. 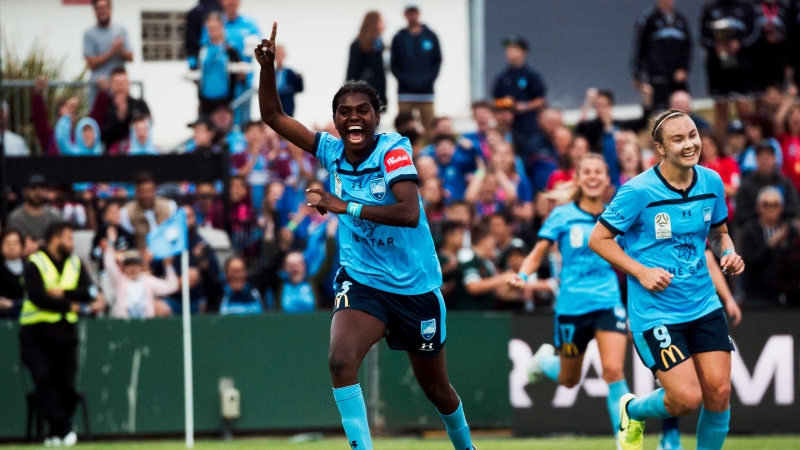 As a child, Evans’ main focus was to play football with her friends and family, but that all changed when she saw someone just like her playing the game she loved for Australia, on the biggest stage of them all.

It was Anaiwan woman and Matilda Kyah Simon that Evans was watching on the television, which opened a new world of possibility for the youngster.

“I remember watching Kyah as a kid and just being so excited to see an Indigenous athlete representing her country, playing football. She played the same position as me too, a striker,” Evans explained.

Kyah became my role model and that was when I decided I wanted to represent my country, my family and my community. Playing for Australia became all I wanted.

Until that day, representing her country was a dream Evans didn’t even know she held. Not due to lack of passion or skill, but because she didn’t know it was possible.

Back home kids in remote communities are never given the opportunity to go out and represent their community or pursue their dreams, so they just don’t think it’s possible.

Evans’ story brings about the old adage ‘You can’t be what you can’t see,’ and highlights the importance of visibility.

The then nine-year-old was irrevocably inspired and determined to do whatever it took to achieve her dreams.

Evans started playing football every day after school and then at 12 years-old was offered the opportunity of a lifetime by someone within her community.

The John Moriarty Football (JMF) program had just been formed by the first Indigenous football player to be selected for the Australian National Team, John Kundereri Moriarty.

With his wife Ros as Managing Director and son James as Program Director, JMF was established to encourage children like Evans from remote regions to get a good education, live a healthier life and chase their footballing aspirations.

Moriarty, who is also from Borroloola said that football changed the trajectory of his own life, which is something he wanted for other Indigenous kids.

“Coming from an era where Aboriginal rights were missing, football gave me such a great start to life,” Moriarty said. 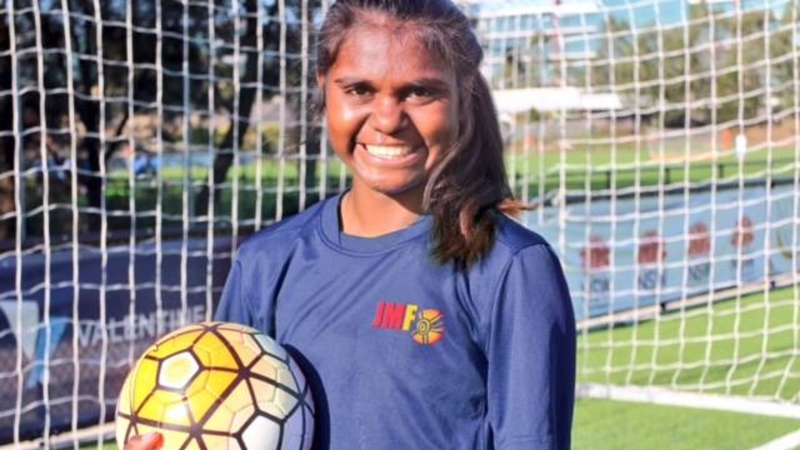 “I was accepted by the new immigrants in this country, but also whenever I went overseas the game gave me great connections both inside and outside of football.

“That connection was what inspired us to set up our program in 2012 and we’ve been breaking barriers ever since.”

Evans went away on her first football trip with JMF when she was 12, but it took some convincing to get her mum on board.

“I was attending the after-school program with JMF and they started picking kids to go away for school tournaments,” Evans said.

“I was picked for a football tournament in Katherine which would’ve been my first trip away from Borroloola.

“Initially my mum wouldn’t let me go. She was very scared because I was so young and had never been away from home before, but after a few tears she saw how important it was to me and let me go.”

Stajcic noted her athleticism along with her “great movement, balance, speed and dribbling of the ball” and in 2015 she was selected for a place at Westfield Sports High School, through a JMF scholarship.

Her selection came as no surprise to Moriarty who said Evans always had the passion to make a name for herself. 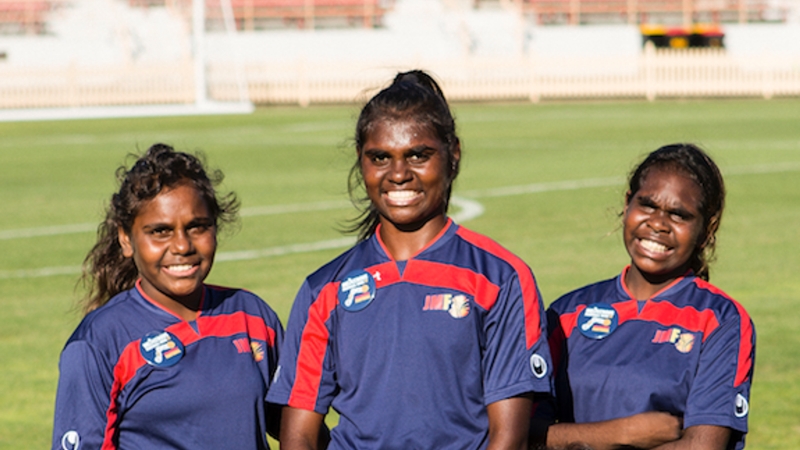 “I’d known Shay and her family for a very long time, her grandfather was one of the Elders in Borroloola,” Moriarty said

“She had always been a very humble person, who was deeply connected to the old people, the old ladies in particular, who are very strong in their traditions.

“Shay had a lot of ability on the field, but she also had a strong drive to reach her ultimate potential.

“We wanted to give her and other girls and boys like her the opportunity to receive an education and that is why the JMF Scholarship Program was implemented.

I know that having someone like Shay to look up to inspires these kids and we want to continue this for girls and boys equally, from grassroots upwards.

Evan’s new venture involved a 3,000 km relocation from the familiarity of the bush to the big smoke of Sydney, NSW where she would eventually participate in the Future Matildas Program.

The adjustment was hard for the youngster, from being away from her family to wearing football boots, it took some time for Evans to settle in.

“Moving to Sydney was very hard. The lifestyle is so different to back home. It’s very busy and very noisy so it took a long time to get used to.

“When I first started wearing football boots, I wasn’t used to it at all. It was just so weird, coming from Borroloola where I was playing barefoot to moving to a big city and playing in football boots.”

Even the concept of time and routine was something that Evans had to master and initially she found it hard to communicate with those around her.

“Having to get up in the morning and do things at a certain time was a big change for me. I would get very homesick,” she shared.

“It was a lot to take in and when I first moved, I was so shy. I don’t think I said a word to anyone.

“Even at school I’d just sit there in silence when the girls would try and talk to me and I was like that for about a year and a half.”

It was a reasonable response for a teenager who had left behind everything she’d ever known, starting at a school which had more students than the entire population of her hometown.

“The hardest part was leaving my family, but also leaving behind the bush life,” she said.

What a great 2 days of football in Borroloola ⚽️. Massive thanks to the Stajcic family for coming out to my community & teaching the Young ones & inspiring them they really enjoyed & absolutely loved it & a massive thanks to John Moriarty Football for all their hard work they’ve done.

My favourite things to do were to go out hunting and fishing and that just wasn’t an option anymore. Even now those are the things I really miss.

But the now 18-year-old maintains her perspective and knows that ‘home’ will never truly leave her.

“I love going home because I just feel so connected to the land and family.

“Even though I miss it, every time I’m back on Country I tell myself ‘this is what you’ve got to do to live your dreams.’

“I think of how lucky I’ve been to have had these opportunities and to have had such an amazing host family in Karlyn and Sean Johns, who have treated me as one of their own,” she continued.

“I know my family will always be by my side, supporting me all the way and I’m so proud to be a Marra woman.

“Representing all of those parts of me and having my community in my heart is really special.”

Evans continues to act as a role model and inspiration for her community, making her Young Matildas debut in 2018 and is now the Vice-Captain of the team. 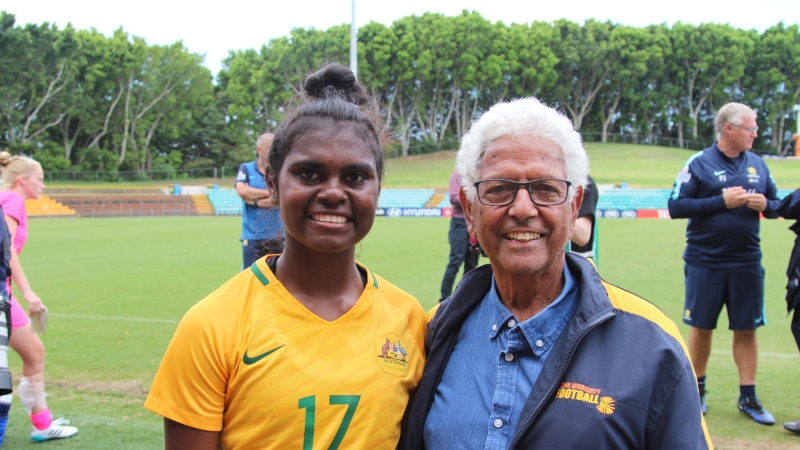 Upon appointing her as Vice-Captain, Young Matildas Head Coach Leah Blayney described Evans as ‘someone who leads by example and is highly respected by staff and players.’

Moriarty echoed her sentiments, saying that Evans is just one example of the exceptional talent, leadership and inspiration that can be unearthed, just by giving kids from remote communities an opportunity.

Evans went on to make her W-League debut in the 2018/19 season and in Round One of the 2019/20 season scored her maiden W-League goal, with her celebration an emotional reflection of just how much it meant to her.

“Scoring my first W-League goal was emotional, it was a great, surreal feeling,” she said,

“I was going out representing my team, my culture, my family and everyone that supported me, so it wasn’t just a goal for me it was for them. Everything I do is for my family and my culture.

“I am so grateful for all the hard work and the sacrifices and support from others like JMF who have got me to where I am. I definitely wouldn’t be here today without them.”

The next goal Evans will look to tick off her list, is to represent Australia as a senior Matilda but her education is still at the forefront of her mind.

She has commenced a degree in Social Work at the University of New South Wales and wants to use her skills to give back to her community, support them and inspire a “positive change.”

“I went from a kid wishing to one day represent Australia to having that dream come true, which is pretty amazing,” Evans said.

“Moving down here, playing for the Young Matildas and playing in the W-League… It’s just unbelievable.

“I want others back home and all over Australia to believe that it can happen for them too.”

You can find out more about JMF HERE